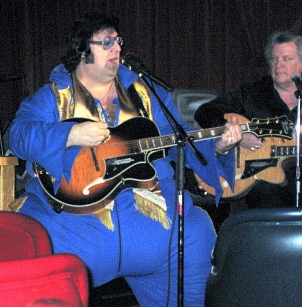 The Bat is going to sign up for a Twitter account to let you know his Texas Hold em poker ruminations.  Why?  Because the Poker Bat is big time.  BIG TIME.  He graduated from bwin poker school and now he’s going to consume the world.

Remember when Elvis Presley was king of Las Vegas, a guy who wore a girdle lest his sequined muffin top flop out causing his leather-esque jacket to ride up that belly, made by American staples like fried banana penut butter sandwiches and beer, and expose that gaping belly button.  Once freed it would open up a sprinkler of sweaty, stinky, belly button juice spraying outward with every hip gyration on the legion of female, formerly teenaged fans that fawned at his feet?

When he was on stage his burly voice, stiff hair, bushy sideburns and swagger still made the ladies swoon like his torso’s containment wasn’t a miracle of innovation and akin to trying to stuff a buick into a gary coleman jacket.  When that gut was contained and those pipes were chirping he was still… Elvis.  Didn’t matter that pills had waged a war on his innards like a light saber slicing through a snow beast’s sternum to provide a Jedi safe harbor for a night on a snowy planet,  didn’t matter that Elvis was all shell and no man, he was still Elvis because he sounded like it. Didn’t matter if the fans swaying at his feet were swaying at the concept of what he used to be, they still swayed.

The Bat’s Twitter account and soon to be his millions of followers don’t care the man slinging words into the vastness of cyberspace, is no longer the young, hip, indefatiguable, lurid, virile (but not viral), template of poker masculinty, instead the Bat morphed into a flabby chuckleberry, with a future of cranes breaking into a house to hoist his ass to safety and away from the teenagers he bribes to deliver him Popeyes around the clock.

Fat Elvis?  This is mortally obese Elvis.  That is the Bat’s future and he’s fine with it.  “Love that chicken from Popeyes!”  Course, nobody else, needs know that about the Bat.  Sure, as the Bat prepares to venture out in the Twitterverse you his loyal blog readers with your dime store understanding of his 0.25 cent words know who the mammonth of a man really is, but the rest of the world lies unsuspecting.  To them the Bat’s bluster will be authentic, he will be the man he used to be, the man that would bluff his entire bankroll and his buddies bankrolls on a hunch he could get his opponents to fold.

Twitter offers the Bat the chance to be that man again.  So the Bat will conquer twitter one retweet at a time.  Joe Seebok, a living breathing walking Greenstein grumper, poker-road CEO, and UB shill with more twitter followers than anybody else,  beware those heavy footsteps behind you is the looming giant ego of the Bat coming to swallow you up.  SeeBiscuit think you have a lot of twitter followers wait til the Bat does his best Sumo Wrestling move and simply falls on you.  Squish-Squash broken leg–you are going to the glue factory.

It may take a year, it may take two, but the behemonth that is the Bat is soon to rule the Pokerworld in terms of followers.  When the Bat sets a goal, unless it’s a daily walk around the block, the Bat doesn’t let anything get in his way of reaching it.

Doesn’t matter that the Bat burns a bankroll quicker than Andy Dick a crackrock, the Bat always returns better and… bigger than before.  So yes,  as that crane looms over the Bat’s house, the Bat will be on his smart phone twittering some witticism that will have his lady fans thinking he’s still that cute, ironic, twenty-something he used to be and one day that will lead to the extra follower who will give the Bat supremacy in the poker twitterverse.

Phil Hellmouth, Daniel Negrunion, all you fools better watch out because the Bat says, “I think you hear me huffing, and I think I’m about to fall on all of you.”